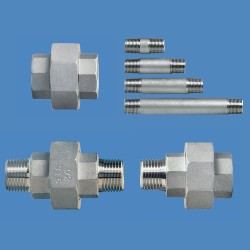 IME 3 Piece Female Union in SS316 comes with a conical metal seat and is used in conjunction with 2 nipples to provide thermal isolation to the thermocouple head.

– Two NPT connections instead of four

IME female union comes with male thread on one end and a female thread on the other, allowing a variety of combinations and lengths.